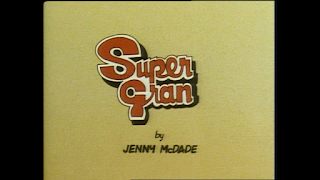 Firstly I have to apologise for the lateness of this blog post. It’s due to life getting in the way and also stopping to watch ‘Doctor Who’, which was fantastic.

So what made me buy both series of ‘Supergran’ on DVD? 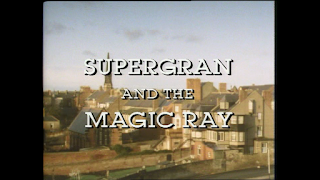 Especially as a child I didn’t really like it that much, though for what reason I’m not entirely sure.

Well, both series were very cheap in one of Networks many sales, at £3 a set. And when I took a look at the guest casts it instantly convinced me to take a punt and buy both.

So we settled down last night to watch the first episode; ‘Supergran and the Magic Ray’.

And I can’t work out what the 12/13-year old me didn’t like; it was simply fun and more than a little bit silly. 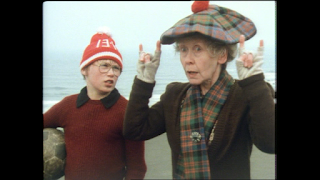 Gudrun Ure was very good as Granny Smith (not the variety of apple!) who is turned into Supergran by being hit by a Magic Ray (though Andrew insists it should be renamed a Science Ray as it is was generated by a machine) whilst watching her grandson Willy play football.

We had to look up how old Gudrun Ure was when she played the part as she was very convincing as both Granny Smith and Supergran. It seems that she was actually 58, showing that the makeup was very good indeed.

This episode also features Iain Cuthbertson as the Scunner Campbell who is of course the villain of the piece. 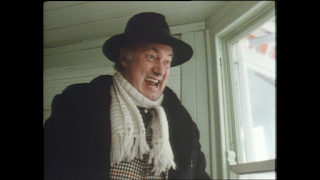 He has stolen the ‘Magic’ Ray of the title and plans to use it to give himself super powers, only it goes astray due to his nephew Tub’s interference and hits Supergran, setting the whole series into motion.

I should also mention the theme music which is sung by Billy Connolly and is very memorable, as it manages to mention such names as B.A. Baracus, Superman, Spiderman, Batman and Robin tooo! 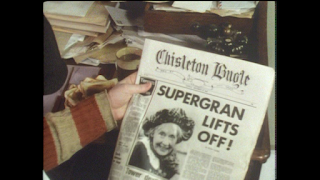 There are no major guest stars in the first episode but coming up in the next few are such names as Michael Elphick, Derek Deadman, the aforementioned Billy Connolly, Patsy Rowlands,Spike Milligan, Roy Kinnear and the legendary Georg(i)e Best.

In the second series we have Patrick Troughton and a merry Charles Hawtrey to look forward to, so we’ll happily raise a glass to both of these legendary names.

Welcome To The Goblin & Sausage

Greetings! I’m Gobbo and welcome to the Goblin and Sausage, a UK BASED TV and Movie Blog. No politics, no biased opinions paid for by shady studio back-handers (take note IMDB) and no preaching. Just simple, honest to goodness tv and movie based articles, products and fan based content. Take a look around!

Tweets by vizcomic
Do NOT follow this link or you will be banned from the site!
This site uses cookies: Find out more.